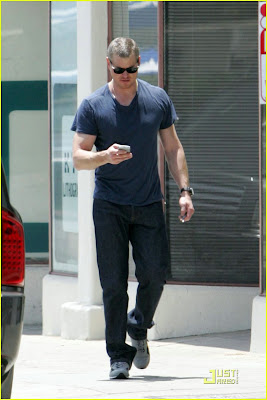 That Dr. Anonymous is one busy guy. I tried keeping up with him on his blog, twitter, radio talk show, chat room and something called ustream. I’m exhausted! Dr. A is a great guy and I had a lot of fun doing my "research". Thank you Dr. A for being my Dr. November.

Here’s my interview with Dr. Anonymous:

Q.1 How long have you been involved in blogging and what got you started?

The 2004 Presidential election got me interested in blogging. But, it wasn't until late 2005, when I took off a week from work because of illness when I really started looking at blogs. It took me about 6 months before I got the courage up to start my own blog - and that was on June 19, 2006 with a five line post.

Q.2 Do you remember the first medblog you read?

Back at the end of 2005, I was looking in blogger and put the term "doctor" in the search. The first blog that popped up was "Fat Doctor," and that was the first blog I read.

Q.3 Who was your first celebrity crush?

In grade school, every afternoon between Bugs Bunny and the Super Friends cartoons, there was Gilligan's Island. Now, some guys had this thing for Mary Ann. But, for me, Ginger really tripped my trigger - if you know what I mean.

Q.4 How's the soccer team doing? (or how did they do? I don't know anything about soccer.)

Our season ended in late October. Even though our win/loss record could have been a little better, these are great kids and I always enjoy working with them, their parents, and the coaches. Definitely a way for me to give back to the community, and that's important to me.

Q.5 What's the most embarrassing CD or song you own?

Your younger readers may not be familiar, but recently I was going through some old stuff and found a bunch of cassette tapes. Remember the song "Electric Avenue" by Eddy Grant? Yup, I owned that one. Explains a lot about me, huh?

Q.6 When did you first know you wanted to be a doctor?

Actually, I can blame my parents for this one. My father is a surgeon. And, he used to take me to the hospital sometimes and I hung out in the doctor's lounge. When I got older I cleaned his office and asked him about some of the instruments he was using and what was the importance of all those manila folders on his desk. So, my first impression of medicine was through my father.

Q.7 When they do the film about you, what actor should they hire to portray you?

It's kind of funny because before I plastered my real face on the blog, I was using pictures of Patrick Dempsey - because those were the early seasons of Grey's Anatomy - and those pics subsequently converted to views on my blog (thanks McDreamy for helping me out).

I definitely support all of these! Me? Any body art or tats? Nah, not since my plastic surgery. Piercings? I make sure I take them out when I go through airports :)

Q.9 Take us through a typical day of work for you.

Q.10 Do you ever wish you could go back to being an anonymous Dr. Anonymous?

At times I think about that. But, in talking with people over the past few months, like Kevin MD, to really gain more "credibility" in the medblog community eventually revealing the real name was inevitable. Of course, putting my voice and face on the blog was probably going a little overboard. But, I was never really the type of person to do something half way - all or nothing for me!

Q.11 Do you walk around the house naked?

Only when my webcam is on. Check out DoctorAnonymous.tv for details :) [you must have to pay extra for the nekkid channels, 'cause I didn't see nothin' ~ MA]

Q.12 What is your favorite Thanksgiving food?

Turkey, mashed potatoes, stuffing, green beans, adult beverages. Was I only supposed to pick one?

Q.13 Tell us about your first day of medical school.

Definitely all a blur to me. The only thing I remember was going down to the anatomy lab for the first time. I remember the sights, the sounds, the smell of formaldehyde. One of the first rights of passage when you're a medical student.

Great question. Bloggers Anonymous was a little gimmick thing I thought of to try to get people to read my blog. Of course, being "Addicted To Medblogs" (hehe) is not a new concept. Within the first 10 days of the blog, I wrote something called Bloggers Anonymous. And, the idea became really popular among the people who were reading my blog at the time. And, the idea was that we would have these "meetings" hosted at different blogs. They would start with me saying/writing "Hi, I'm Dr. A. And, I'm a Blogaholic." And people would "bring" food and beverages to the "meetings." I didn't know it at the time, but it was my first attempt at trying to create and grow an online community.

The BA concept resurfaced during the infamous Dr. Flea episode. I posted something called Time To Be Proactive on May 16, 2007 in trying to get the medblog community together - if for anything else - to support each other - especially during that time when there were daily reports of medblogs being deleted and/or going private. I created a group blog called "I'm A Blogaholic" which was active for a few months until things relatively calmed down in the medical blogosphere.

I completed my Family Medicine Residency in June 2001 and started my new job as a full fledged "real" doctor three months later. On September 11, 2001, I was at my office and heard from some patients that there was something going on in NYC. When I was able to take a little break in the morning, I went to our little break room to watch the TV. Live on television, I saw the 2nd plane go into the tower. At lunch time that day, I gave a medical talk to one of our local community organizations. Needless to say, we didn't talk much medicine for that hour.

Q.16 Who is the most famous person you have ever met?

We didn't sit down and have a beer or anything. But, I remember the first time I saw Tiger Woods in person at a golf tournament. He was actually in the same group as John Daly. These are two of my fave pro golfers. Quite a thrill for a golf hack like to me to see these guys swing a golf club.

Q.17 Will you draw a hand turkey and send it to me so I can post it with your interview?

Uh, I think I'll pass on that. I kind of see some kind of Rorschach analysis test on my "hand turkey" hehe [Rats! He caught me. I already had the "hand turkey" analyst all lined up. I wonder if I can get my deposit back? ~ MA]

If you couldn't be a doctor, what would you be?

When I was growing up, I really wanted to be an astronaut. Now? Hmm. Probably an internet talk show host :)

Any color scrubs that make me look like Patrick Dempsey.

Parade or Football? Football
Lunch or Dinner? Lunch
Breast or Drumstick? Both. If I had to pick one – Drumstick
Stuffing or Dressing? Stuffing
Pecan or Pumpkin? Neither. If it's not chocolate, it's nothing to me hehe
Turkey Sandwiches or Turkey Soup? I'm a sandwich type of guy

Photo: This is Dr. A tweeting. Dr. A thought he could confuse us by posting a pic of McDreamy on his blog, but we always knew he was really McSteamy. Looks just like Dr. A in his videos, doesn’t it?

Thanks so much for interviewing me. This was so much fun to do!

Very fun interview and congrats on being Dr. November!

MBA: Thx for enabling non-team members to post comments. I tried commenting on your earlier post that Dr.November had to be Dr.A based on the 'New Media Medicine' blurb, but I wasn't allowed to :(
I got over it because you weren't offering any prizes for the right guess :)
Great interview.

I had a feeling it would be Dr. A!
Great interview!

I am afraid I don't know this electric avenue you speak of Dr A. :)

Great interview...thanks to both of you! :)