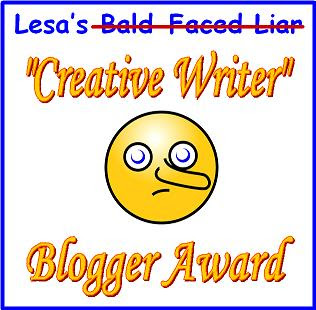 Amanda has awarded me the “Bald Face Liar Award.” I just think she is trying to pay me back for my “Amanda Gets Meme’d” series.

1. Thank the person who gave this to you.
Thanks Amanda!

2. Copy the logo and place it on your blog.
Done.

3. Link to the person who nominated you.
Done.

4. Tell six outrageous lies about yourself and at least one outrageous truth.
See below.

5. Post links to the seven blogs you nominate.
Come on, you know I don’t do that.

6. Leave a comment on each of these blogs letting them know you nominated them.
The last time I left a comment on someone’s blog, I suggested they sew little outfits for a dead lizard that someone put on their desk at work. My comment days are over.

My six lies and one truth:

1. I believe that truth is stranger than fiction. Instead of telling you six lies and one truth, I’ve told you six truths and one lie.

2. I’ve been to a nudist camp. Yes, they really do play volleyball. People carry towels around because it is proper nudist etiquette to always sit on a towel. I was surprisingly comfortable being naked around strangers. I was only there for one visit. It was a great experience, but I doubt I’d do it again. No wait, I’m pretty sure I’d go to a nude beach if given the opportunity.

3. I am the only person on the planet who hates the Simpsons. I’ll watch any other cartoon, from the Flintstones to Family Guy, but NEVER the Simpsons.

4. Since beginning my blog in October 2006, I’ve gotten married and had two kids.

5. I invented the now popular “lava” cake years ago, when I was a college freshman. I would bake a chocolate cake until the sides were set and the middle was warm and gooey. Then my friends and I would sit around with spoons and eat it right out of the pan. Not only was it delicious, it was practically a diet food because you didn’t need any icing.

7. I’m afraid of birds. Something about the way they look at me with that one eye.

I totally did a spittake when I read about the "Amanda Gets Meme'd" series -- hee!!!

Well, assuming item 1 is true, and is therefore one true of six, I'm figuring #4 is the lie.

And remember, you may have commented on my blog about the outfits for dead lizards, but I'd already requested it of my officemates. It's all a matter of degree.

LOL. So what you're really saying is, you don't think I could land me a husband, right?

That's why I like your blog so much...we both want to dress up dead lizards in cute little outfits.

I'm not going to reveal the lie. A girl's gotta have some secrets.