Eleven Lords a Leapin' Over the Platypus 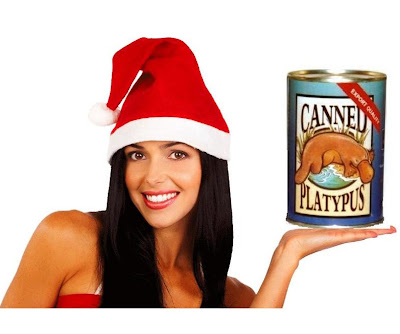 On the eleventh day of Christmas, your true love gave to you, eleven lords a leapin’. Leapin’ over what?

I was already getting educated for an allied health profession when I found out about an accelerated BSN progran, so I started taking the prerequisite classes to get into that.

Q.2 What’s the best part of your job?

We can wear white after Labor Day, and pajamas every day. The worst? Having to wear pajamas every day, except the dress code enforcement here is pretty lax and we wear pretty much whatever we want, so I guss that's another best part.

I did a skilled manufacturing job for fifteen years, so, yeah, kind of.

I've never seen KY where I work. We use Surgilube, but I wouldn't put it past a hillbilly to eat the stuff. I've seen people eat a lot worse.

I got kicked in the neck and bitten, two separate incidents, this year.

Probably clothes. I'll walk in the store and say "oh, pants are on sale" and I'll buy a pair or two not thinking that I already have tons of pants. Hell, I don't even need pants for work since we can wear pajamas every day.

I don't know. My boss says I put Fuck You as a chief complaint on a chart, apparently that's what the patient told me, but I don't remember doing it.

I don't do that, but there are some movies that are so good that I'll watch them whenever they're on TV. And then there are the ones that I've never seen in their entirety in one sitting but I've caught enough bit and pieces over the years to put it all together. Say if something like Cool Hand Luke comes on I have to watch at least some of it. Goodfellows fits into the bits and pieces category. (That's the one where they do the Lufthansa Airlines heist, right?)

Doctors aren't worth the effort. Oooof!

Leave the caps lock on.

I've only gone to one holiday party, and that was the year I started my current job and the new job and the old job both booked adjoining banquet rooms on the same night. I got bored and left before they had to get the police involved.

I was talking to my neighbor last night, he's the head chef at the place where this year's party was, and he said "it was pretty wild, you guys can drink". They bought gourmet pizza for those of us who had to work.

Q.15 - Do you play a musical instrument?

a. reindeer - they kind of all look alike to me. Dexter?


Thank you for being my eleventh day of Christmas, the Platypus at March of the Platypi (and thank you for the canned platypus!)
Posted by Medblog Addict at 12/21/2008 07:30:00 PM

Tag you're it...come out and play!