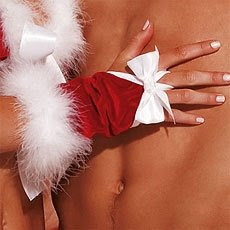 [Well, I guess this picture could explain why MonkeyGirl was a week late with her answers.]

On the fifth day of Christmas, your true love gave to you, five golden rings. Score! What did you have to do to get 5 golden rings?

I can't go into detail lest I push your blog rating into the NC-17 category. Let's just say that the discussions we have at the nurses' station at 3 am are all about how to get sparklies from our true loves, and it's enough to make the docs blush!

When I realized how long med school would take. I'm more of an instant gratification kind of girl.

Seriously, the best part of my job, hands down, is helping truly sick people. The worst part, without a doubt, is the not sick people with an overwhelming sense of entitlement that suck the ever-lovin' life outta me.

Aw, hell, nursing is a career? I mostly consider it a side job until I figure out what I want to be when I grow up. Or if I grow up. I used to manage a Taco Bell. Now that is a career! And the fringe benefits (ie: free food) were fantastic. Too bad I moved up one whole pants size every six months or so.....

Not only is it a true story, but we are no longer allowed to use KY brand lubricant in our ER because the patients kept eating it. We now exclusively use "Quick-Lube Gel". Sounds like something you'd find at an oil change place.

Yup. All the time. Apparently, the drunker the psych patients are, the better looking I get. Rawr.
Q.6 When did you first hear the expression “nurses eat their young”?

The first day of nursing school. And every day thereafter. All I can say about that is..... mmmmmm. Young are tasty.

My husband's crazy ex-wife. Well, she's not paid for yet, we're still making payments, but she is indeed truly useless.

Invisibility. Dude, think of all the fun you could have. And the stuff you could steal, er, borrow. Besides, I'm better looking when you can't see me, anyway.

Somebody spilled a coke on a chair and I sat in it. Immediately after realizing my mistake (because my ass was soaking wet) we got an EMS call for a code. I had no time to go and change. By the time we called the code, my pants were dry, so I didn't think about it again. 4 hours later, as we were leaving, one of my "friends" pointed out that it looked like I had a major explosion of diarrhea in my pants, and had been walking around with it all night. It did. And I had. I wanted to die. They laughed at me for weeks.

Oysters. Aphrodesiac my ass. What's sexy about throwing up?

Ferris Bueller's Day Off. Come to think of it, maybe that was when I decided to go to nursing school. "Heard that you were feeling ill, had a fever, and a chill...."

It's kind of an "us against them" thing as far as I'm concerned. Docs and nurses against the patients. Seriously, as much bitching as I do about stupid patients, do you really think I have time to bitch about the docs? Occasionally I'll work three or four shifts in a row with the one doc that I absolutely hate, and then I have a lot to bitch about, but frankly, I'm so worn out after working with him that I don't have the energy to bitch. And as far as the docs on the medblogs go, I only read the ones that I like, so I rarely feel the need to bitch at them, because I usually agree with them.

Everything. Don't laugh. I'm not kidding.
Q.14 Tell me the craziest thing you have ever seen at one of those wild hospital Christmas parties I’m always hearing about.

Unfortunately, patient confidentiality laws apply here, because she did end up in the ER. But I can tell you that she was naked, there were broken bones, and cooking oil was involved.

a. reindeer - Comet, of course. He's the fastest.

c. carol - Feliz Navidad. Especially the part where you can hear "The Chicken Dance" in the background.

d. holiday television show - The Sound of Music. I'm not sure why it's a Christmas show. But it's on every year at Christmas time and I watch it every year.
e. activity - Eating holiday treats. As many as possible.
Thank you for being my fifth day of Christmas, MonkeyGirl.
Posted by Medblog Addict at 12/23/2008 08:00:00 PM

FWIW, the 'five gold rings' line is the only part of the lyric not in the common domain; the rights are owned by Novello...

This has been a great series MbA. I enjoyed it muchly.

Have a wonderful Christmas.

I have to catch up on all of them.

Very creative and a lot of work, and a great idea!

Happy New Year MbA. We would comment up above but you locked us out.
I'm sure all 15 (lucky you if that excludes google searches) of us are happy to see more law, more personal, more whatever.

Hi JMB, thanks for stopping by. No more comments for a while.

Y'all have a happy new year.